RAF 100 STEM Residential Course at RAF Wittering is a residential course aimed at students in Year 10 who are members of a uniformed youth organisation. The course was very over subscribed, but Becky from Bearsted Senior Section was fortunate that her application was successful.

Becky was keen to attend because she loves STEM subjects, but wanted a better idea of the career options available. This residential allowed her to experience the power of STEM by seeing first-hand how it solves real life problems in an engineering and logistics.

Becky arrived at the RAF base not knowing anybody, but quickly made friends. There were 100 students at the event, mostly cadets and scouts, but a few representatives from Girlguiding. They were split into mixed teams, and they worked together on elements of support to a Humanitarian Aid operation in a far off country. They completed various tasks including budgeting for materials and food, cooking a meal from a 10 Man Operational Ration Pack, testing materials for defects and repairing defects, working out how to load an aircraft, building radar towers and even bomb disposal!

As well as having lots of fun, the students gained valuable employment skills including working in a team, communication, time management, problem solving, planning and presentations. They also worked towards a British Science CREST Award and an Industrial Cadet Award, both of which are viewed favourably by universities  and by employers.

Becky had a fantastic week. Her highlights included having lunch with Carol Vorderman. Carol is an honorary Ambassador for the RAF Cadets, and was interested to find out how Girlguiding are introducing STEM into their programme.

The week finished with patents being able to see what the students had achieved and the students receiving their awards. Becky received Silver Level Industrial Cadet and Crest Awards.

The RAF provided this course free of charge. They are celebrating their Centenary this year and want to commemorate their past, celebrate who they are and inspire people about their future. They want to increase awareness of STEM based careers which will ensure that the UK maintains a highly skilled, diverse workforce that will enable our nation to continue to thrive. 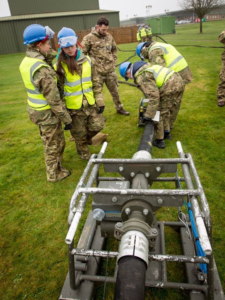