This weekend has been really fun and exciting. On Friday we were all really nervous as we did not know anyone except people from our own unit. Once we had all arrived we started with a fun edible game, ‘Beetle’ or ‘Ladybird’. During the breaks between games, the leader team had questions we had to discuss. ‘What are you afraid of?’, ‘What was the last film that made you laugh/cry?’, ‘What is your comfort food?’ are some of the examples of questions we had to discuss. After the ‘Ice breaker’ games, we got into Patrols and made a ‘seagull’, (whilst enjoying the first of several non-alcoholic cocktails!) Each patrol had a paper plate and transformed it, one way or another, into a ‘seagull’. We had to name our ‘seagull’. The names were; ‘Anrol’, ‘Biloum’, ‘Brian’ and ‘Sally’. We planned our route and got ready for the quiz. By the end of the night we had made a ‘patrol’ and made at least one new friend.

In the morning, we had a big day ahead of us in Brighton. As we had planned most of route the night before, we had less to do. It was quite a struggle getting ready to leave at nine, but we did it, eventually and just managed to catch the bus. In Brighton we had got our quiz and ‘seagull’ out and started finding the answers to the questions. By the time we got lost, had fun, taken photos, and selfies, it was 11:30, and we were ready to head up the i360. The i360 was built over two years and stood 138m tall. Once we had got over the fact that we were so many metres in the air, we started moving around. We found it quite cool how people had done ‘street art’ on top of buildings. After a half an hour ‘flight’ we went for lunch, cramming into a small fish & chip shop, a welcome shelter!

After lunch we were free to roam until we were needed at the Sea Life Centre. Many people went off and found the shopping centre while some went to the Pier. My patrol walked onto the pier even though it was raining and windy. After finding a crepe maker and some people getting really sticky from it, we moved to the Sea Life Centre and saw all sorts of amazing fish & creatures. After the Sea Life Centre, we were let free again and at 3:55 moved to the Brighton Pavilion Ice Rink. The ice rink was lit up in all colours and there was music playing.

After gaining trust on the ice we started growing more confident and leaving the edge for more time. Most people stayed on their feet for all the time, but others fell. Everyone helped each other, like Guides should do, with staying up right. After a great day in Brighton, most people were shattered and ready for bed.

Sunday was nice as the leaders allowed us to have a ‘lay in’. The morning was bright, sunny, but cold. We had a Brunch of baked beans, sausages, bacon, scrambled egg and hash browns which were all very tasty. Unfortunately, we had to clean and pack, which was a shame as we had enjoyed ourselves so much. After a ‘talk’ from Bev Pearce, BP adviser, and Mary Saunders, County Commissioner, it was time to go home, clutching our souvenir stick of Brighton Rock!

After a very enjoyable weekend, it was sad we had to go but I hope we have all made new friends and had an enjoyable end to our Guides Adventure! A big thank you to the four leaders, from North Downs, for organising it for us. 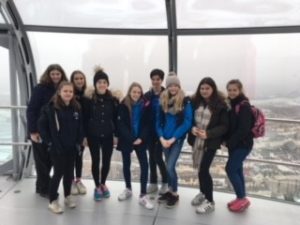 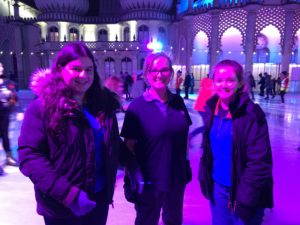 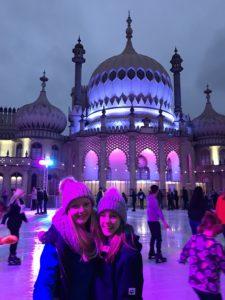