Growing up Wild – Growing Your Own

1 st Pembury Brownies did the ‘Growing Your Own’ badge in the spring term.

Amongst other things we made scarecrows for the Village Scarecrow Competition, where our Donald Trump Scarecrow won first prize. We made bird feeders, planted sunflowers for a unit competition and we also planted lettuce, radishes and spring onions. Every girl took a pot of each type of seed home to grow over the summer.

We had reports that the spring onions were very strong, the radishes very peppery and the live lettuce – which you picked leaves from and they continued to grow – were a great success. The sunflowers grew, but very few developed the usual spectacular heads.

Early in October the Parish Council contacted us to say we had received a special award in their ‘Pride in Pembury’ competition, for encouraging girls to try different activities and spreading pride in the local community. We didn’t even know we had been nominated! On Saturday 6th October we went to the presentation tea where we received our award. 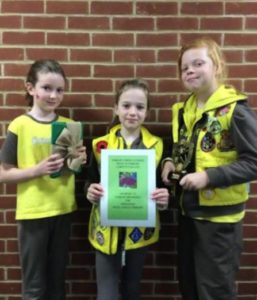